Dr Samantha Ege publishes an article in the Guardian 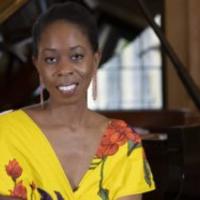 Dr Samantha Ege is the Lord Crewe Junior Research Fellow in Music at Lincoln College, and her research addresses Florence Price’s professional network. As well as being published in American Music, Women and Music, and the Kapralova Society Journal, Dr Ege has now had her writing featured in the Guardian newspaper.

Her article, entitled “‘Their music lit a fire in me’: hearing the voices of three neglected composers gave me my own,” discusses Dr Ege’s first encounters with the musics of Florence Price and Margaret Bonds. In Dr Ege’s words:

“I first met Florence Price (1887-1953) and Margaret Bonds (1913-1972) in the autumn of 2009. I was an undergraduate exchange student at McGill University in Montreal, and as I sat in my professor’s early 20th-century music course and learned of the lives and music of these two Black female composers, it became clear these meetings were meant to happen.”

Dr Ege goes on to describe how the exclusion of black composers and performers from the Western canon and musical curricula creates, in Dr Ege’s words, a “world in which I felt I could never truly belong. This was my norm. Black women did not exist there. Each history seminar, theory class and piano lesson affirmed this apparent reality. Being the only girl of African descent in the music classroom implied that I should not exist there, either. I knew I wanted to pursue music history and piano performance, but I had little sense of my place in either realm.”

However, the discovery of the musics of Florence Price and Margaret Bonds, with their uncompromising connections to black folkloric hues, lit “a new fire within me.” This fire went on to inspire Dr Ege to “depart from the canonic giants who had once dominated my repertoire to focus more on my interpretations of lesser-known works.”

Dr Ege will be giving a performance of “Price’s Fantasie Nègre, Bonds’ Troubled Water and Kaprálová’s Sonata Appassionata at my Barbican debut on 24 November. As the first pianist to play these works in the UK, I am aware that many in the audience will be meeting these composers for the first time.”

You can read the Guardian article here, and find tickets to her Barbican debut here