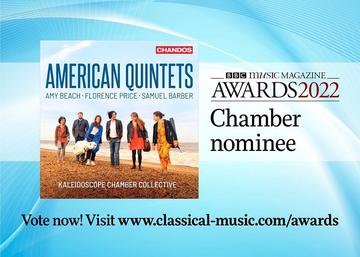 The album 'American Quintets' recorded by Rosalind Ventris with her group the Kaleidoscope Chamber Collective has been nominated for the 2022 BBC Music Magazine Chamber Award. The album features recordings of works by Amy Beach, Samuel Barber and Florence Price, and was released  last year. The recording is the world premiere recording of Price’s Quintet in A minor and it was Editor’s Choice in Gramophone Magazine. The BBC Music Magazine Awards celebrate the very best of the classical recording world, from ambitious symphony and opera releases to imaginative and intimate chamber and solo albums.

Rosalind Ventris is the Faculty of Music's Director of Performance and Performance Studies and is a leading advocate of the viola and works as a performer, teacher and researcher. Her career was launched as a prizewinner of the Lionel Tertis International Viola Competition aged 17. As a soloist, she has appeared at the Bozar, Royal Festival Hall, Wigmore Hall, Slovak Philharmonic and the Concertgebouw, and with orchestras such as l’Orchestre Royal de Chambre de Wallonie and the Belgian National Orchestra. Rosalind has collaborated with renowned artists such as pianist Mitsuko Uchida, violinist Nicola Benedetti, cellist Sheku Kanneh-Mason and actor Simon Russell Beale.The Timeswrote of a concert in March this year: ‘the plaintive responses of violist Rosalind Ventris –the echoes finding their own echo, as it were – were actually the most affecting of all.’ Her work celebrates repertoire outside of the traditional musical canon. Last year, she recorded an album of solo viola music by twentieth-century and contemporary female composers and she has performed this repertoire at a number of prestigious festivals and venues in this year. Another highlight from the current season is her work as a member of the Kaleidoscope Chamber Collective, with whom she has performed multiple BBC Radio 3 and Wigmore Hall broadcasts. The group is an Associate Ensemble of the Wigmore Hall and performed in the Hall’s 120th anniversary celebrations this year. Their recording of Florence Price and Amy Beach’s piano quintets was released on Chandos Records in May: this is the world premiere recording of Price’s Quintet in A minor and it was Editor’s Choice in Gramophone Magazine (July 2021).

Vote for the recording on the BBC Music Magazine website.

Hear the ensemble's recording of the work by Amy Beach on the BBC's Record Review.

Read more about the album on the Chandos website.