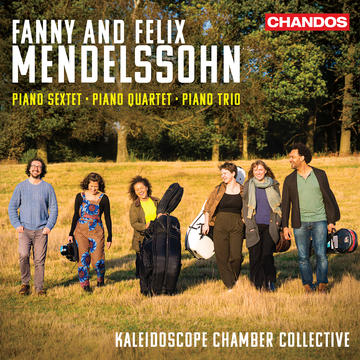 Fanny Mendelssohn Hensel, born four years before her brother, Felix Mendelssohn, was an accomplished pianist and a prolific composer. When she died of a stroke, aged just forty-two, she left around 460 pieces of music, some 250 of which are songs. The difficulties of making a career in her own era (her supportive father would not allow her to publish or work as a ‘professional’ composer) have condemned much of her work to obscurity, a situation that is now rapidly being reversed as the number of concerts and recordings devoted to works by women composers increases.

Here the award-winning Kaleidoscope Chamber Collective champions her Piano Trio and Piano Quartet, alongside Felix Mendelssohn’s under-performed Piano Sextet. Fanny composed her Piano Quartet whilst a student, aged seventeen. In contrast, the Piano Trio was her last chamber work, written in her final year. The Piano Sextet by Felix Mendelssohn was also an early work, written in just a few short weeks in the spring of 1824. For some reason he never published the work (perhaps because of the unusual scoring), hence it became his Op. 110 when published, posthumously, in 1868.

The album was included in Gramophone magazine's Editor's Choice section and received a five star performance rating in BBC Music Magazine. They have also received glowing reviews in The Strad and The Times.

Mendelssohn, Fanny and Felix - Chamber Works is available now on CD and all digital and streaming platforms. Hear the Kaleidoscope Chamber Collective perform in Oxford on Sunday 6 November at the Holywell Music Room.

Our Director of Performance and Performance Studies Rosalind Ventris will also perform with Héloïse Werner at the JdP Music Building on Tuesday 18 October.