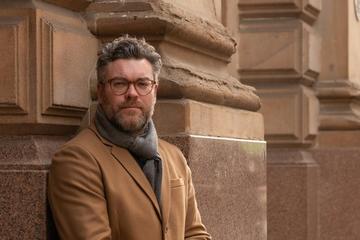 The BBC Scottish Symphony Orchestra have announced that alumnus Ryan Wigglesworth (New College, 1998) will take over as chief conductor in September 2022. He will be conducting the opening concert of the orchestra's 2022-23 season. On his new appointment, Ryan writes: "I feel immensely privileged to be starting this journey with the wonderful and uniquely versatile musicians of the BBC SSO, a journey which I hope will prove to be long, fruitful and ever adventurous. I look forward to making this beautiful and vibrant city my musical home, and to connecting with all of our audiences across Scotland in the coming seasons."

Ryan Wigglesworth has established himself as one of the foremost composer-conductors of his generation. He was Principal Guest Conductor of the Hallé Orchestra from 2015 to 2018 and Composer in Residence at English National Opera. He held the Daniel R. Lewis Composer Fellowship with the Cleveland Orchestra for the two seasons 2013/15 and 14/15 and was Composer-in-Residence at the 2018 Grafenegg Festival. In close partnership with the Royal Academy of Music, he recently founded the Knussen Chamber Orchestra which made both its Aldeburgh Festival and BBC Proms debuts in 2019.

Also active as a pianist, recent play/direct projects across Europe and the Far East have included concertos by Mozart and Beethoven, and he regularly appears in recital partnering Mark Padmore, Lawrence Power and Sophie Bevan.

One of the leading composers of his day, his first opera, The Winter’s Tale, premiered at ENO in February 2017 in a production directed by Rory Kinnear and conducted by the composer. Other  works include commissions from the Royal Concertgebouw and Cleveland orchestras, BBC Symphony (BBC Proms), song cycles for Sophie Bevan (Wigmore Hall/Grafenegg) and Mark Padmore (Aldeburgh Festival/Wigmore Hall). Further performances of his works have been directed by, amongst others, Sir Andrew Davis, Edward Gardner, Pablo Heras-Casado, Vladimir Jurowski, Oliver Knussen, Jukka-Pekka Saraste and Franz Welser-Möst. Recent and current projects include a song cycle for Roderick Williams (Barbican), a piano concerto for Marc-André Hamelin (BBC Proms), and a large-scale work for chorus and orchestra, co-commissioned by the Bergen Philharmonic and Hallé.

Born in Yorkshire, after his Oxford studies he went on to the Guildhall School of Music & Drama. Between 2007-9 he was a Lecturer at Cambridge University where he was also a Fellow of Corpus Christi College. In January 2019 he took up the position of Sir Richard Rodney Bennett Professor at the Royal Academy of Music.

More information can be found on the BBC website.