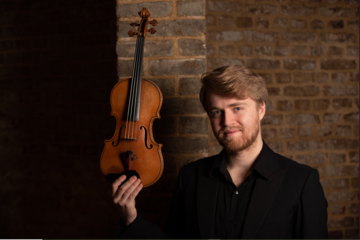 In this series, we're inviting members of our alumni community to share updates on their life after leaving Oxford. If you would like to be featured, please email oxfordmusician@music.ox.ac.uk

Charlie Lovell-Jones (Christ Church, 2017) won the Gibbs Prize in Music at Oxford. He completed his MA (Performance) degree at the Royal Academy of Music, where he won the Postgraduate Strings Prize. In September he begins his MMA at the Yale School of Music in Connecticut, USA. He recently led the Sinfonia of London at the BBC Proms for the second year running, and he talks to us about his journey up to that moment and beyond.

I’ve had the pleasure of working with John Wilson (conductor of the Sinfonia of London) since I was 13. We met on a National Youth Orchestra course, and he subsequently invited me to join in rehearsals with the John Wilson Orchestra for their 2013 MGM Hollywood Prom (by which point I was 14). I began working professionally with the orchestra as a member of the first violins when I was 16, at which point I also worked with John for the first time as soloist, playing the Waxman Carmen Fantasy with the RTE Concert Orchestra. When John re-launched the Sinfonia of London in 2019 with our first patch of sessions recording Korngold’s Symphony in F#, it was a huge thrill joining the first violins of this new orchestra. We recorded eight CDs before the pandemic hit. I can’t describe to you the thrill of working with such an incredible group of players, and a conductor who has such clear vision and such well-considered goals for the music he conducts and the sound he wants to create with it. John gives everyone in his orchestra liberty to play as a soloist might, and one of his many amazing skills is to cohere that room full of stars into one breathtaking constellation (just to flog the metaphor...).

In that limbo, I graduated from Oxford and started at the Royal Academy of Music in September 2020. My first orchestral project at the Academy was to lead Strauss’s Metamorphosen, which John was conducting. We had an incredible and cathartic time working on and performing this anguished work of loss and mourning, everyone in the orchestra gave it their all - for us students, the turbulence of the time was given such expression and release in the music. The following summer (June 2021), violist Julie Park and I were the soloists in Colin Matthews’s arrangement of Benjamin Britten's Double Concerto for violin, viola and string orchestra, with the Royal Academy of Music Strings once again and John at the helm. It was the world premiere in fact, which was a joy to be involved with! We performed matinee and evening concerts in the Snape Maltings after a week of rehearsal.

It was during that week that John first let me know that Andrew Haveron, John’s concertmaster for years and a truly incredible musician, violinist and leader, might not be able to make it back for the upcoming patch of sessions and the BBC Prom Concert (August-September 2021). John took me to one side and said that if Andrew couldn’t make it, he wanted me to lead the orchestra for the Prom and half the sessions, the other half to be led by John Mills, who has long worked with and led for John and is also a seriously wonderful violinist. I cannot tell you the thrill that went through me in that moment! It was quite a lot to process, as I was performing recitals across the UK and in Switzerland that summer, and was set to compete in two international violin competitions - the Shanghai Isaac Stern and the Joseph Joachim. But I knew that this had to be a foremost priority - leading one of the most exciting orchestras in the UK in several CD recordings and their debut BBC Prom was the most incredible opportunity of my career so far. I still managed to reach the semifinals of the Isaac Stern Competition, but had to withdraw from the Joachim due to the workloads involved. I figured: this is the kind of work that winners of such competitions would enjoy taking on, and the sheer calibre of the musicians - and indeed sound engineers and producers! - involved makes this a clear choice.

Every single player in the Sinfonia of London is phenomenal, and working with them all is such a joy. So when it was shortly confirmed that I would be leading, when I walked into my first session with the Sinfonia of London as concertmaster, I was filled with the most incredible excitement and determination to deliver. And of course plenty of nerves to boot! Everyone was so supportive, collegial, and genuinely excited for me. It’s an orchestra full of honestly lovely people, and the sheer power of the sound they can make is electrifying! It is all at once vivid, free, expressive, and focused, pristine, cohesive. The first piece I led was Korngold’s Symphonic Serenade, which is a gauntlet for string orchestra if ever there was one. After its innumerable challenges along with a beautiful Intermezzo by Schreker, I led Strauss’s Metamorphosen. The musical demands actually yield so much musical freedom - from the most unfathomably sensitive, intimate utterances to the most ebullient, searing climaxes, there is so much to give, to enjoy. Then on to a full disc of Ravel - across the orchestral literature, the music on this disc has some of the most magical violin solos, along with the most kaleidoscopic and imaginative music one can find. The Ravel disc was my first leading the full orchestra, and the colours and textures the full group could create was extraordinary. I was totally enchanted. 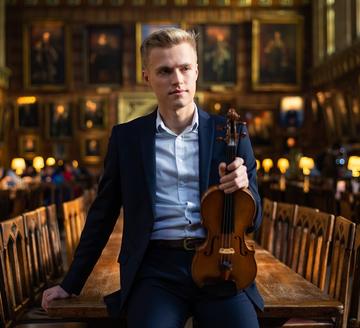 Along with the first Prom in 2021, the whole patch marked a number of full-circle moments. Not only did I get to lead Metamorphosen again with John, almost a year after our performance with the Academy String Orchestra. I also got to record and perform music intrinsically related to modernist artistic movements in turn-of-the-century Vienna, which was one of my absolute favourite courses of study while at Oxford (‘Modernism in Vienna’, convened by Jonathan Cross, my principal tutor at Christ Church). Furthermore, the opening of the Prom, Strauss’s Die Fledermaus Overture, was the very first piece of standard concert repertoire that I ever led, as an 11-year-old with the National Children’s Orchestra of Great Britain U13s Orchestra. Over 11 years later, it was the very first piece I led in concert with the Sinfonia of London - indeed, that I led in concert with a professional orchestra - at their debut BBC Prom.

I will never forget the excitement of that evening. Standing backstage while the orchestra tuned, seeing all those people sitting in the hall, getting ready to walk on and take a (small) bow. I won’t ever forget the words of the stage manager, ’the leader is walking on, the leader is walking on stage’, as I stepped out into the arena. The 2021 Prom was all about the decline and fall of 19th-Century Vienna, and the fragments, the alienated peoples, the violence that it left behind. By the time we played Ravel’s La Valse, closing the first half, I was fully into the swing of things. La Valse has long been one of my orchestral favourites, and we had recently recorded it. The performance was wildly enjoyable, and the Korngold Symphony that followed it simply staggering to experience.

Since then, I have had the pleasure of recording more CDs as concertmaster, continuing to share the role with the amazing John Mills, whose support and advice are invaluable to me. We’ve given two performances at Snape Maltings, and recently (July 16 2022) gave our second BBC Proms performance. This was perhaps even more enjoyable than the first - a complete programme of British music, some pieces totally iconic, others little-known, but all truly awesome. Sitting at the end of Adam Walker’s flute as he flew through Huw Watkins’s fiendish and beautiful Flute Concerto was like being blasted by brilliance for a full 20 minutes! It was inspiring - and I think that’s one of the things I love most about leading this orchestra, is that it’s so deeply and immensely inspiring for me.

Now, just under a year down the line since our Vienna Prom, I feel I’m really coming into my own. I felt so much energy in our British Prom (a surprise, as I had only just recovered from a nasty 3-week bout of Covid-19!). I took every single bit of that energy, the nervous and the exhilarated, and poured it into my love for what I was doing. During the big exposed solos in the Tallis Fantasia, my heart was racing, and I loved it!! The music shimmers with such tender beauty and emotion, and I knew that all of my emotions in that moment were there to help me deliver. Everyone in the orchestra felt swept along by the grandeur in the Bax, the virtuosity in the Walton, and the heart, sincerity, and fortitude of the Enigma Variations. The beauty is that we all become friends through the music; with each other and with the audience. You walk off the stage, and everyone is energised by the joy of intense moments shared with each other. An orchestra is such a beautiful thing, and I am overjoyed to lead this one.

I’m writing from a desk on Lake Superior, on holiday with my partner and his family, getting ready to start a new chapter at the Yale School of Music studying with Augustin Hadelich. The last 10 and a half years studying with my teacher Rodney Friend, working with John Wilson, and meeting more people whose presence in my life I could not do without, whose support, friendship and kindness mean the world to me - they have yielded so many treasures. And even though I’m in a new place surrounded by new ideas, I know that they are all there for me back home. Especially as I’m flying back on a monthly basis to lead more Sinfonia of London concerts and recordings, alongside many solo performances! I’m very excited for the future, and so grateful for the past. Right now, I’m off to jump in the lake!