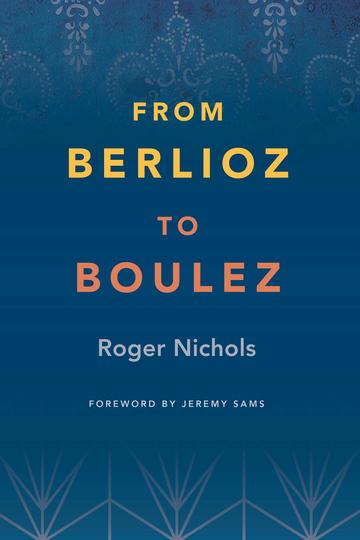 Alumnus, acclaimed writer and broadcaster Roger Nichols (Worcester College, 1959) has recently published From Berlioz to Boulez, a collection of 55 articles exploring French repertoire of the 19th and 20th centuries. He begins with Berlioz’s Symphonie Fantastique and ends with his obituary of Pierre Boulez, and looks at twenty significant composers on his journey through this turbulent and fertile period. In his Foreword, Jeremy Sams writes, 'This is a book to be savoured slowly like a fine wine. A work to relish and to linger over for a lifetime', while Christopher Dingle in his BBC Music review asks, 'Where would appreciation of French music be without Roger Nichols? Few can match his deep knowledge, while his engaging eloquence is a model for any writer.'

Roger Nichols studied music with Edmund Rubbra and Frederick Sternfeld. He published his first book, on Debussy's composing technique, in OUP's series Oxford Studies of Composers in 1972. Since then he has published or contributed to over two dozen books about French music since the 1820s, including biographies of Ravel (1977 and 2011), Debussy (1998) and Poulenc (2020), and The Harlequin Years (2002), a study of music in Paris from 1917 to 1929. As well as broadcasting regularly on BBC Radio 3 until 1992, he has edited French works for Peters Edition, including the songs of Duparc and most of Ravel's piano pieces. In 2006 he was appointed chevalier de la Légion d'honneur for his services to French music.

For more information and to purchase From Berlioz to Boulez, please visit the Kahn & Averill website.