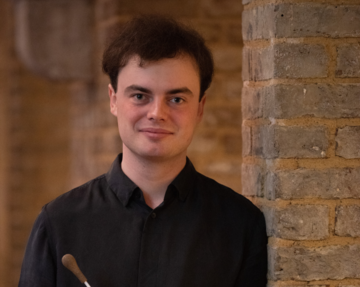 Bournemouth Symphony Orchestra have announced Tom Fetherstonhaugh (Merton College, 2016) as its Assistant Conductor for the 2022/23 concert season. The bursary-supported role will provide a platform to build professional experience and development, with mentoring from the BSO’s world-leading conductors and musicians, which include Chief Conductor Kirill Karabits, Principal Guest Conductor Mark Wigglesworth, and Associate Guest Conductor David Hill.

On his new appointment, Tom writes: “I’m thrilled to have been appointed Assistant Conductor of the Bournemouth Symphony Orchestra. It is an exciting opportunity to work with, and learn from, this outstanding orchestra across their season. The competition process has been really inspiring and supportive, and I can’t wait to start with the BSO in September!”

Tom Fetherstonhaugh read Music at Oxford, where he was organ scholar at Merton College and conducted Oxford University Sinfonietta. He went on to train with Roland Melia and later with Sian Edwards at the Royal Academy of Music, where he graduated with Distinction in 2021. He is the founder of Fantasia Orchestra, which has recently been joined in concert by soloists including Alim Beisembayev, Jess Gillam, Sheku Kanneh-Mason, and Tasmin Little. Tom’s engagements this season have included conducting the Antigua and Barbuda Youth Symphony Orchestra ‘Playing to Inspire’ project with the Kanneh-Mason family, and assisting Francesco Cilluffo on Verdi’s Macbeth at The Grange Festival with the Bournemouth Symphony Orchestra.

For more information about the appointment, visit the BSO website.