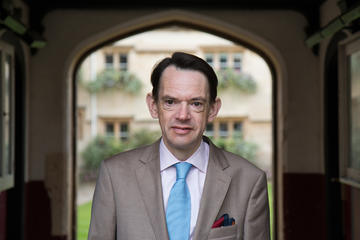 It is with deep sadness that the Faculty reports the death of Dr Guy Newbury, Lecturer in Music at Pembroke College for over 27 years.

Born in Inverness, Guy arrived in Oxford in 1982 to study Music at Magdalen College.  He also studied piano with Denis Matthews and Audrey Inness, and composition with John Joubert and Jonathan Harvey.  Upon completion of his BA, Guy moved on to postgraduate studies at the University of Sussex and then the University of Durham, where he earned a PhD in Composition. Guy also served on the Board of the Faculty of Music.

In 1989 he began teaching in Oxford, and four years later was appointed Lecturer in Music at Pembroke, a post he held until his death.  During his nearly three decades here, Guy was responsible for the Pembroke undergraduate Music cohort, in addition to teaching students from a wide range of colleges in Techniques of Composition, Analysis, Composition and Orchestration.  He also regularly assisted with Solo Performance as an interactive pianist, and in 2018 marked his 80th accompaniment in the Final Honour School Solo Performance.

Guy’s own musical accomplishments are extensive.  He has a significant number of vocal, chamber and instrumental compositions to his name, many having been performed by leading soloists and ensembles including the BBC Philharmonic, the BBC Singers, the Chamber Group of Scotland, Peter Lawson and Andrew Ball.  He also received commissions from the Choir of Magdalen College and from the Oxford Sinfonietta.  Guy was a regular pianist for the Oxford Philharmonic Orchestra Residency Programme and Young Artist’s Platform, and a founder member of the Faculty's Ensemble Isis.

The Faculty extends our deepest condolences to his family and friends.