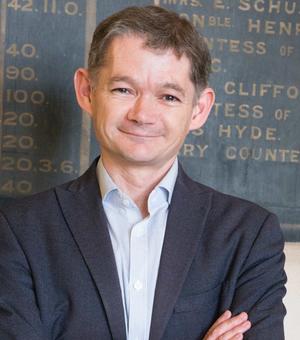 I was appointed Head of the Humanities Division in January 2022, and my role is to provide strategic leadership across all areas of the Division’s activity (research, teaching, governance, personnel and HR, EDI, finance, development and fundraising, IT, libraries and capital projects), and to advocate for the Humanities both within the wider university and beyond. I currently hold this post alongside my continuing role as Associate Head of Division (Research). I led preparations for the Division’s return in the REF2021 and I chair the management committee of The Oxford Centre for Research in the Humanities (TORCH). I am the academic lead for the programmatic elements of the new Schwarzman Centre for the Humanities, and I am very keenly excited about the transformative potential that our new building will bring.

My research is focused on late nineteenth- and early twentieth-century music, especially in Scandinavia (Grieg, Sibelius, Carl Nielsen) and England (Elgar, Vaughan Williams, Delius). Drawing widely on analytical, historical and critical theoretical models, my research examines landscape both as a medium of representation or description and as a mode of embodiment or performance. I am concerned with the ways in which particular landscapes shape our responses to music and sound, and equally the extent to which our sense of landscape and environment responds to patterns or fields of acoustic perception.

I am the author of four monographs, and editor/co-editor of four further volumes. My first monograph, Grieg: Music, Landscape and Norwegian Identity (Boydell, 2006), was a critical reappraisal of cultural nationalism through analysis of the role which music and landscape played in the formation of Norwegian identity in the nineteenth century. In my second, Carl Nielsen and the Idea of Modernism (Boydell, 2011), I considered landscape as part of a complex engagement with musical modernism, in dialogue with received traditions of identity, structure and narrative. My third, Delius and the Sound of Place (Cambridge University Press, 2018), examines the role of place in selected works, including ‘On Hearing the First Cuckoo in Spring’, Appalachia and The Song of the High Hills, reading place as a creative and historically mediated category in his music. My most recent monograph, Jean Sibelius: Life, Music, Silence is a biography intended for both academic and general readers, and was awarded the Presto Classical Music prize in 2021 and named one of the books of the year by Paul Binding in the Times Literary Supplement. The biography formed the basis for a BBC Total Immersion day at the Barbican which I curated in October 2022.

My Delius research also included the collation (with Dr Joanna Bullivant) of a comprehensive scholarly online catalogue of his works, and the rediscovery of the original draft of his String Quartet (1916), including the world premiere recording of the first version of ‘Late Swallows’ with the Villiers String Quartet for Naxos. In October 2020, I introduced the premiere of the previously lost two movements of his youthful String Quartet in C Minor (1889), again in collaboration with the Villiers Quartet. In conjunction with Joanna Bullivant, Kevin Page and David Lewis, I explored new digital ways for promoting Delius’s music, funded by an AHRC Follow-On Award, part of which is available via the British Library’s Discovering Music site. Our work has won accolades from the British Library (Research Labs award, 2018) and Oxford (Vice-Chancellor’s Public Engagement with Research award, 2019).

I was Principal Investigator of the interdisciplinary research network Hearing Landscape Critically, funded by the Leverhulme Trust, between 2012 and 2016, and in 2011 I was Scholar-in-Residence at the Bard Music Festival, for which I edited a volume with Princeton University Press. I was one of the editors of the leading peer-review journal Music & Letters (Oxford University Press) for over 8 years, and then an associate editor of The Musical Quarterly until 2019. I currently serve on the editorial board of the Journal of the American Musicological Society and I am an advisory member of the editorial boards of the Danish Yearbook of Musicology and Svensk Musiktidsskrift Online. I am a member of the AHRC Peer Review College and I sit on the board of OU Innovation. In 2019, I was appointed a Visiting Professor at the University of Copenhagen.

I was educated at a state comprehensive school in Kent and benefitted from the County Music Service (including Kent Youth Orchestra). I am committed to access and outreach, and to supporting academically talented students from all backgrounds who merit a place at Oxford. I teach broadly across the undergraduate curriculum, especially music theory and analysis, topics in music history post-1700, nineteenth-century symphony, and issues in contemporary music and performance. I have supervised 18 doctoral theses to completion, and my graduate students have researched a wide variety of topics in music history and theory post-1700. I hold a postgraduate certificate in teaching in higher education from the University of Nottingham, and in 2016 I won the award for best Postgraduate Supervisor from the Oxford University student’s union.