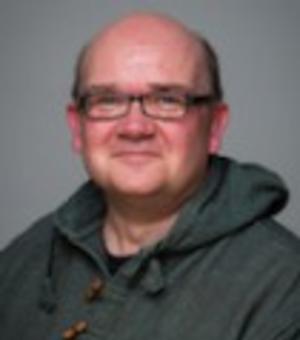 Martyn Harry studied Composition with Alexander Goehr as part of his BA at Cambridge University, and Music Theatre Composition with Mauricio Kagel in Cologne on a DAAD scholarship. He has an Associate Diploma in Performance and Communications Studies from the Guildhall School of Music, and a PhD in Composition from City University where he studied with Simon Emmerson, Michael Finnissy, Douglas Young and Robert Saxton.

From 2000 to 2003 Martyn was the Northern Arts Composer Fellow, based at the University of Durham, in which capacity he produced numerous compositions for the Northern region (covering Newcastle, County Durham, Cumbria, Northumberland, Teeside and the North Pennines), involving professional arts organisations, universities and members of the community. As part of his work he created Durham’s innovative Opera and Music Theatre course, where Durham students devised a new production every year for performance in primary and secondary schools, in conjunction with CTC, now Theatre Hullabaloo.

Martyn became Head of Compositional Studies at the music department of Durham University in the academic year 2003-2004, and had a significant role in the department’s successful bid to become a Centre of Excellence for Teaching and Learning in Music. Along with Agustin Fernandez, Martyn directed the I3 project in close conjunction with Simon Clugston of Northern Sinfonia. He created a number of innovative music theatre projects with the director Lore Lixenberg, including productions of Berio’s A-Ronne, Wishart’s Anticredos and Kagel’s theatrical tour-de-force Staatstheater, which won approbation from the composer. He will also be remembered for his initiatives to change the learning environment for composers, such as the new first-year Contemporary Music course, which combined close study of avant-garde compositional techniques along with opportunities for composing for film (e.g., the film scores created by postgraduate film composers for Buñuel’s L’Age d’Or, Eisenstein’s Battleship Potemkin, Chaplin’s East Street and – jointly with Mariam Rezaei and Richard Stopford – Dimitri Kirsanoff’s Ménilmontant).

In January 2009 Martyn Harry took up his present post as a university lecturer at the Faculty of Music, specialising in Composition, with tutorial responsibility for music at St Anne’s.

From 1993 to 1996, Martyn was the Executive Producer, New Music, for the international recording company Sony Classical. In this capacity he initiated and produced recordings of music by Valentin Silvestrov, Gija Kancheli, Michael Gordon, David Lang, Julie Wolfe, Howard Skempton, Louis Andriessen, Terry Riley, Nikolai Korndorf, as well as the Bang on a Can All-Stars, the Geoff Smith Band and Ensemble Bash.

From 1997 to 1999 he worked for the Arts Council of England as a consultant for its Recordings and Publications scheme, and as an assessor for lottery-funded schemes. Martyn worked closely with the British Music Information Centre, the Sonic Arts Network, the SPNM and the Contemporary Music Network, before the merger of these organisations as Sound and Music.

Between 2000 and 2003 Martyn also orchestrated a number of Hollywood film scores such as the music for Insomnia,  Happy Here and Now, Spivs, Inside I’m Dancing and The Descent.

Martyn Harry’s compositions have been performed by ensembles such as the London Sinfonietta, Northern Sinfonia, Allegri Quartet, Eos, Piano Circus, Psappha, the New Music Players and the BBC Singers and broadcast on BBC Radio 3, Classic FM, NDR 3 and WDR 3.

His most frequently performed instrumental works include Ozymandias for cello and piano, Fantasy Unbuttoned for 19 players and Regenstimmen for solo harp, which features on Unknown Public’s CD sampler of British contemporary music, ‘Critical Notice‘, and has been broadcast many times worldwide, including on BBC Radio 3 and Classic FM.

Martyn Harry has worked closely, particularly in his role as the Northern Arts Composer Fellow between 2000 and 2003, with Northern Sinfonia, leading to premieres and subsequent performances of his works including Still Life, Taking Leave of a Friend, Signal Failure, The Enigma of Arrival, George Meets Arnie For Tennis, Chamber Intimacy and his song cycle The Spell at Hall 2, The Sage, Gateshead, in January 2007.

Martyn’s music theatre works include Restraint for Handcuffed Pianist and pre-recorded tape, The End of the Line for three singers and four players, and Signal Failure for actors, ensemble and computer graphics. He has also composed a number of children’s operas in conjunction with Theatre Hullabaloo, many of which received premieres at The Sage, Gateshead.

His most recent compositions include the orchestral piece The Enigma of Arrival; George Meets Arnie For Tennis, a work recorded by the New Music Players and performed at The Sage, Gateshead, in May 2006; Restraint for Handcuffed Pianist, which was broadcast by Richard Casey on Radio 3’s ‘Here and Now’ programme; and Eingestellt for electric string trio and distortion effects, a work premiered in St Petersburg in May 2007 and performed again at the prestigious Moscow Autumn Festival in November 2007 under the composer’s direction.

Martyn’s forthcoming projects include SOUTH, an innovative project combining elements of opera and film on global warming in Antartica that has been commissioned by the New Opera Group; a new children’s opera for performance commissioned jointly by theatre companies in Britain and Australia; and a new work commissioned by His Majesty’s Sagbutts and Cornetts.

The following is a summary of the areas that I am teaching in the current and forthcoming academic years. These areas may change from year to year, and my overall research interests may provide a better guide to what I teach in future years.